Recently, my last period class fell into a habit of struggling to get started each day.  One day, when it took the class ten minutes, I was finally fed up with yelling at students to sit down and get started.  Instead, I asked them “how much time do you need to get started?”  We defined “getting started” as sitting down with the opening out, phones put away, and a student leader starting class.

Student proposals ranged from 3 minutes to 10 minutes and we finally settled on the categories of 3, 5, or 7 minutes.  Three students gave their passionate explanations of why 3 or 5 or 7 were the best for the class (I personally was a fan of the 3 minute speech).  I should have known better than to let the 7-minute delegate talk last but, sure enough, the class voted for 7 minutes.  Fine.  At least it’s better than 10 minutes. 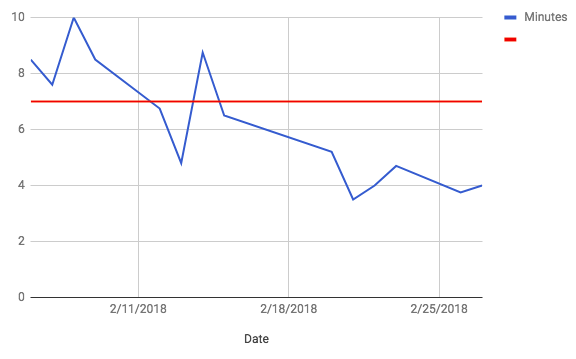 The first days seemed to go better and they even were able to reach their goal twice.  Then, another bad day set in.  The problem I identified was that the group had set a goal but had not defined any strategies to meet the goal.  What did they need to improve?  Again, after a debate with the class we settled on the following strategies.

Since that date the time it has taken to start class has continued to decline.  It began to level off at about four minutes this week which I think is a much more reasonable amount of time and similar to the other classes I have throughout the day.  I am now going to start keeping track of how well students follow through with their strategies and maybe we’ll see it decline even more!  Either way, I’m proud of their improvement!